Darren Bowles: How we created a bold new typeface for Versus Arthritis 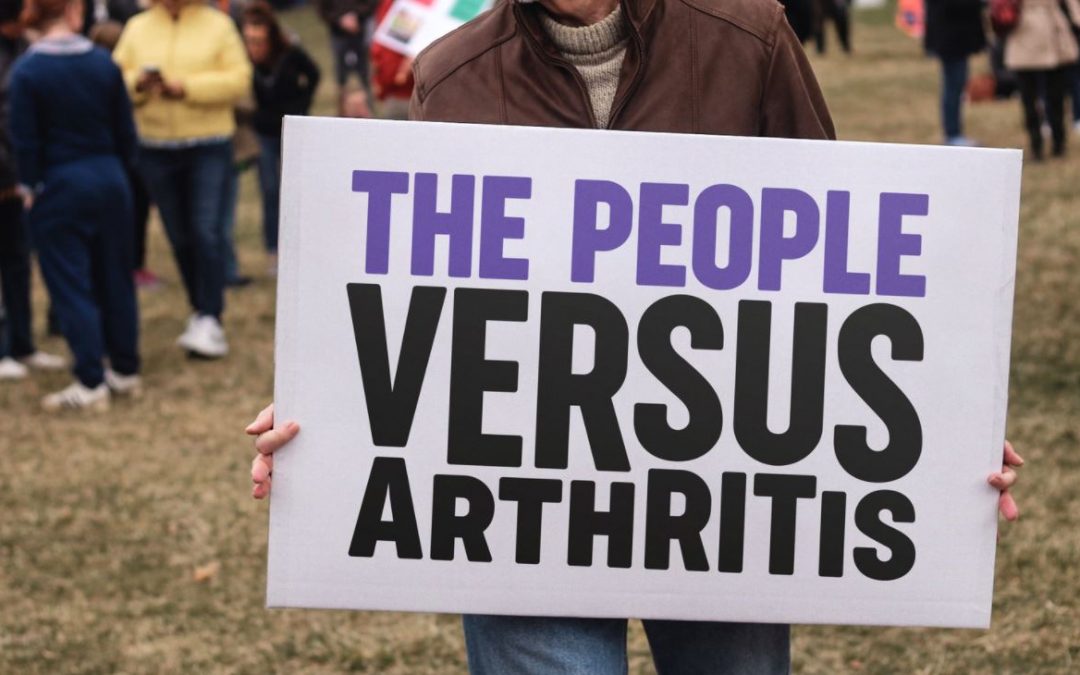 I’d always had an appreciation for a well designed typeface, but it wasn’t until I had to help commission a new font for the British Heart Foundation (BHF) that I came to realise how much time, care and attention was involved in creating one. The font designer David Marshall said that typeface development is the most artistic science and the most scientific art that there is and I couldn’t agree more.

Versus Arthritis | Brand Film from Re on Vimeo.

I was very excited to speak with Darren Bowles, the Executive Creative Director of the agency Re, to learn more about how his team worked alongside their partners M&C Saatchi London to develop the new visual identity and typeface.

What was the challenge that you were asked to help address?

When Arthritis Research UK and Arthritis Care merged in 2017, they asked for our help in creating a braver identity that would help them be more vocal. They wanted help reframe arthritis as something society should also no longer tolerate.

We were passionate about addressing the unjustness of arthritis. There seems to be this perception that it is inevitable that women of a certain age will get arthritis. We heard people say things like ‘well my auntie Joan has some arthritis in her fingers and on the whole she’s ok.’ It was difficult to hear people being so dismissive of it. While it’s great that auntie Joan’s is ok, there are thousands of people living with arthritis who are not. It isn’t just the elderly that are affected. Children can get it too and there are 250 different types.

We knew that the new brand identity that we were creating needed to represent many different types of voices, moments and emotions. We wanted to use design to make arthritis more tangible. We wanted to help people understand it more. We used very personal stories and observations to bring the brand to life. For example, one person told us that their arthritis made their knees feel like matches on fire, and another described their fingers feeling like a handful of nails, that every time they crunched their hands, the nails were digging into them. Their depictions of the disease were so visceral, we wanted to bring that to life visually in a way that would do the depictions justice. We didn’t feel that photography could do that, so we worked with the illustrator James Joyce and at times where we didn’t think illustration worked, we wanted to use typography.

One of the things I love most about the new brand identity is that the typography isn’t just functional, through its design, it tells a story. Can you tell me about the team’s creative process in developing the type?

When we first started working with the team, we arranged meetings with staff, volunteers, people living with the disease and their carers to understand as much as we could about the psychology behind the disease.

We wanted to know how they felt, and we learnt that many people living with arthritis felt overlooked by the rest of society. One of the biggest problems that they faced is that they felt that they were on their own and not taken seriously. On the one hand they had to deal with the pain and suffering that the disease caused, but on the other hand, their suffering was being dismissed and overlooked. It was heartbreaking. It wasn’t fair. We wanted them to know that someone had their back, understood, and was fighting their corner. We wanted people living with arthritis to know that they didn’t have to face these struggles alone. This idea transformed into their new name; ‘Versus Arthritis.’

People living with arthritis described how the disease can lead to bone rubbing on bone. They used words like ‘crushing’ and ‘pressure’ to describe its impact. We wanted the typography to be a visual metaphor to help us tell this story. 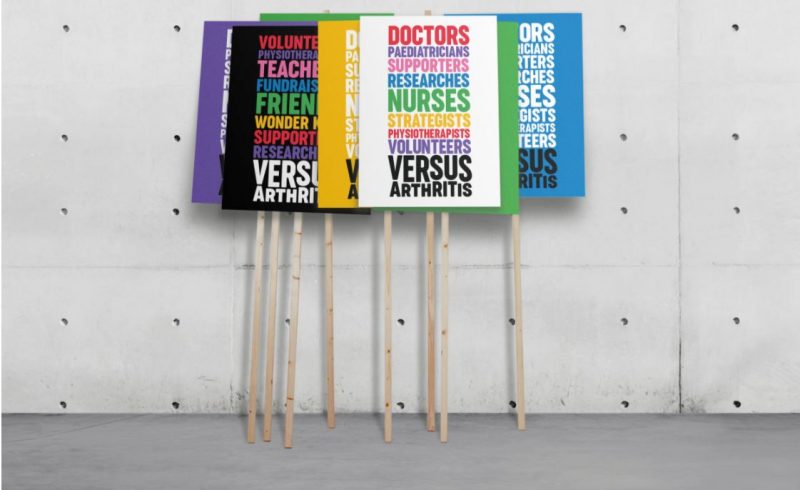 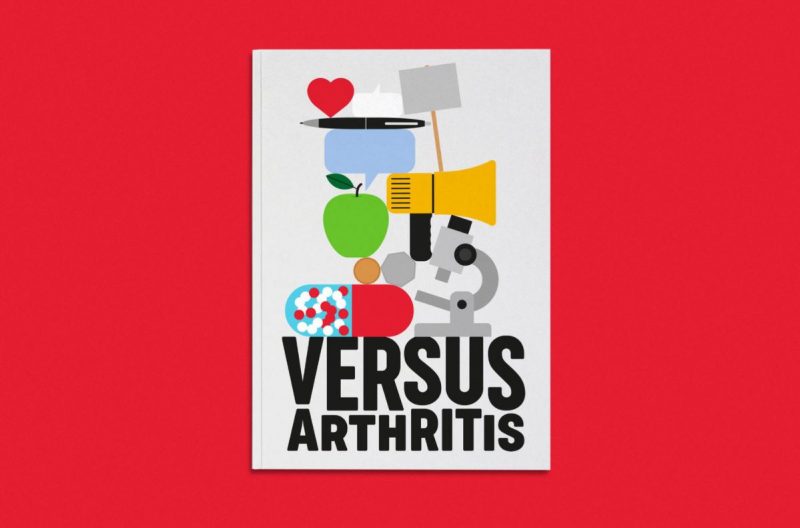 I personally feel that it helps to personify brands. To think of them as people. Thinking about how a brand would move or interact with different things helps us to bring ideas to life. We had this in mind when we were exploring the idea of a dynamic logo.

We had the idea that we could apply pressure to the logo, but the individual characters in the typeface would resist the pressure. The pressure would come from challenges that people living with the disease would face, which would be literally stacked on top of the logo, be it societal change, changing perception of the disease, lobbying for better rights in parliament.

We kept the leading tight, so that the characters could each respond inturn to the pressure. We wanted the logo to look like it was being squashed, but because of the strength of the typeface, it could withhold the pressure, that it could form a resistance. Colour was also important. Despite the serious subject matter, we didn’t want the brand to be too dark and dreary so we injected some bold colour into the type to convey a sense of character, personality and hope.

How long did it take to get the font right and how did you go about bringing it to life?

We probably developed the font over a three to four month process. We started by looking at existing fonts and tried to find something that had the right kind of attitude and presence. We came across a typeface with an Italian foundry called Zeta Fonts. We thought that this typeface was really close to what we had envisioned. We contacted the Foundry and said that we’re keen on some of the work that they’ve done there’s one particular type. We wanted to know if they’d be open to working with us to customise it. They were fantastic to work with. We went through a six week period of iterations to finse the designs and then we had a further two to three month process where we ensured that every part of of the new type was right and that we had all the right glyphs and all the right forms that were going to be necessary for the charity.

What were the biggest challenges along the way?

One of the biggest challenges that we had was getting the balance of seriousness and approachability. Without careful thought and consideration a font can suffer from being too utilitarian and it can lack character. But if you add too much character, the font can lose its longevity. Every time you add a character somebody sees something within it.

There is a fine line of trying to make it distinct, meaningful but also functional. Of course any new font needs to pass the accessibility testing to ensure its legibility, but we were aware that this font had to work for everyone at the charity. We needed to ensure that the font was easy to use because we wanted volunteers and fundraisers to feel comfortable using it.

Even with all of these considerations, we wanted the font to have enough character to convey the story that I described earlier. There were many drafts, we overstepped several times. The cutting room floor was full of executions that we thought would be really interesting, but weren’t. It’s ultimately about temperance, it’s about reduction. It’s always best to go too far to come back to the place where actually the idea still maintains its spirit.

What recommendations would you give to organsiations that are looking to develop their own typeface?

It is important to get an understanding of two requirements. First, you need to understand who the user of the typeface is. You need to understand their requirements and you need to understand the audience that will be reading the font. For example, if you were designing a font for a charity for the blind or visually impared, you can’t create a typeface which is hard and indecipherable. Once you have an understanding of the user and the audience you can then think about the narrative that you want the font to convey. After some brainstorming, I recommend that you develop and test two routes. One that veers more to where the creative idea and the other which focuses more on utility and see what tests well. Often, you’ll find some middle ground as well finding a semblance.

Before committing yourself to create something new from scratch, you should first look to see what is free and what typefaces are already in the world. While it is great to commission something new and I’m a big advocate for brands having their own typeface, the cost involved in developing your own font is high and for many organsiations and charities, it isn’t feasible. To commission your own font, you need to ensure that it can convey a message. It needs to add value to the brand, value to the customers and the communications. If a new font won’t add value, I’d recommend looking at something that is more practical. By purchasing a ready-made font, you’d save money which could be invested elsewhere. If you do decide to commission a new font, don’t try to cut corners. Developing a new font is expensive and like with most things, you get what you pay for, after all this is a business asset. Even though the initial investment is high, sometimes commissioning your own font can save an organisation money in the long run as they won’t need to pay a licence fee for another font.

Over time, with consistent use, a bespoke typeface can be a strong brand asset, it can help improve awareness, add personality to a brand and can help a brand cut through a crowded market. Versus Arthritis’ new brand identity has been live for a little over two years now and it is great to see how brave they’ve become. Their latest campaign ‘It’s not alright’ is an example of how their new identity is helping them to become braver and more vocal.